Erasinos River (main photo) runs through Nea Kios, a small fishing village with a gravel beach, fine fish taverns and a huge square where you can drink coffee and watch the village life. If you wake up early one morning, drive to Nea Kios and buy fresh fish from straight from the fishermen, just in with the night’s catch.

Nea Kios seems sort of oversized, it is home to about 3,500 people, but the square and the main road through town is laid out for at least ten times as many. But there is a reason for this: the square is the place to be on various events and village feasts, such as the carnival in February, the Mikrasitika festival in July and the Kiana Festival in August.

The name Nea (New) Kios makes us believe that there is an old Kios, and oh yes, there is, but it’s in Turkey. Greeks from Turkish Kios settled here in 1927 and named their town Nea Kios.

Not only famous because of Lerna, Mili, the name meaning mills, is the town the Nafpliots visit to eat what they believe is the region's best «souvlakia» (grilled meat on skewers).

Fresh water springs and a lake, described in the Greek mythology, was located near Mili and Lerna. The bottomless lake was said to be one of the entrances to the underworld. It was here that Poseidon and Amymoni created their son Nafplios, who later gave the city of Nafplio its name, and Heracles fought the monster Hydra, a dragon with a snake's body and nine heads. (Heracles had to fight twelve different monsters in his so called labors, the first one in Nemea.)

The lake, that still exists, is now part of Nafplio’s water supply. Quite a fascinating thought, actually: When you drink the water in Nafplio, you drink water from a mythical lake.

In Mili you will also find the tower depicted right. It was built by the Franks, who ruled here for roughly 250 years until the year 1460. The tower is called Pirgos tis Vasilopoulas or Princess Tower. On the hill beyond, Pontinou, we can see the ruins of Lerna castle, which was last used during the Greek revolution that started in 1821. High above Mili lies a castle, we like to walk up there, but you can drive most of the way.

The last village we come to, when we travel south / southwest in Argolis is Kiveri.

It is, if we are to believe the legends, to be founded by some of the first Dorians (a tribe of ancient Greeks) who invaded the Peloponnese, in the 1600 century BC. What we know for sure is that Kiveri means (to) govern, and has been continuously inhabited since antiquity. Nowadays people come here to relax on the beach or enjoy seafood at one of the taverns.

Read more about the beaches of Nea Kios, Mili and Kiveri here.

If you drive a bit further south, you can visit the villages of Xiropigado and Paralio Astros in Arcadia county. 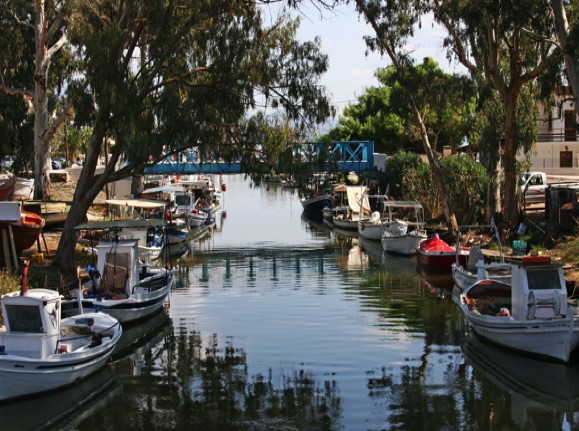 The Fish market in Nea Kios (above) and (below) the lake in Mili where Herakles conquered Hydra. 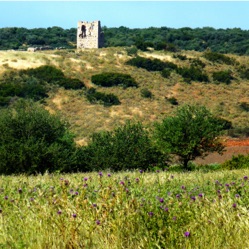 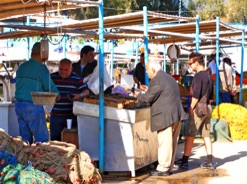 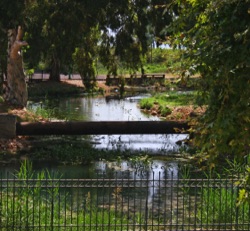 The Princess' tower in Mili (right) and below left the beach in Mili, to the right the beach and town of Kiveri.