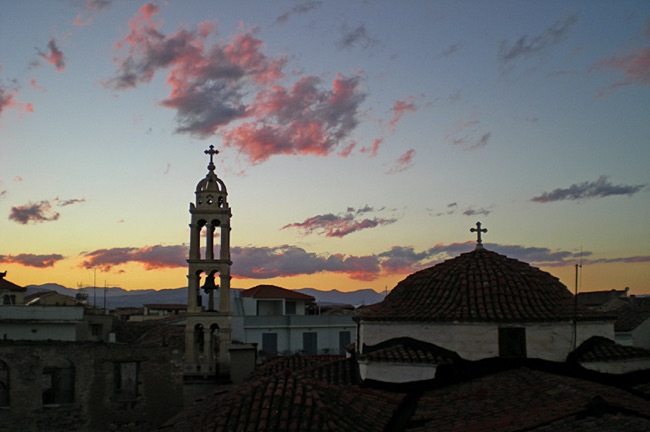 AGIOS SPYRIDON AND THE BULLET HOLE

This church, from the early 1700's, is perhaps not much of a beauty on the outside; the inside is unpretentious, but distinctive and almost mysteriously dark. Before entering, examine the tiny brass frame to the right of the entrance door. It encases one of Greek history's most famous bullet holes. One Sunday in 1831, Ioannis Kapodistrias, Greece's first govenor, was on his way to mass in this church. Outside he met two of his opponents, the brothers Mavromichalis from Mani, the wild west of the Peloponnese peninsula and known for its war loving inhabitants. The president and the brothers greeted each other, before the brothers picked up, respectively, a gun and a knife and killed Kapodistrias. And the bullet that allegedly shot him got stuck in the church wall.

In addition, both brothers were soon executed, but the incident led to upheavals and chaos in the newly created state of Greece. This is one of the reasons it was decided that a king surely would be able to calm tensions, and young Otto (1815 - 1867) was obtained from Bavaria to do the job in 1832.

By the way, it is said that Kapodistrias once had complained that the name Petrobey Mavromichalis was unpronounceable, and this is the real reason for the assassination...

AGIOS GIORGOS AND THE ROYAL THRONE

The Nafplio Cathedral (main photo) has a long and colorful history. It was probably built sometime in the beginning of the 15th century, when the Venetians ruled in Nafplio, and when the Turks took control, it was converted into a mosque. The Venetians came back, rebuilding it again to a Christian church, before the Turks once more changed it to a mosque. In 1822, when Nafplio was liberated, Agios Giorgos was converted to serve as an Orthodox church.

The church has beautiful frescoes, but also a genuine royal throne. Otto, Greece's first king, who ruled the country from Nafplio in 1832 to 1834, used it when he attended mass.

AGIA SOPHIA, ONCE THE OLD CITY'S ONLY CHURCH

Little Agia Sofia (picture right) was from about 1780 the only church within the city walls where the Christians were allowed by the Turks to hold worship. Before that, the Greeks had to go up to Agii Pantes in Pronia. Agia Sofia is one of the oldest churches in Nafplio, perhaps from the Byzantine period.

This church’s interior is one of the most beautiful in the city. Naos Panagia was built sometime in the 1400s, and rebuild around year 1700.

Every Greek city has a patron saint, and usually one of the churches is given this saint's name. Not so in Nafplio. Panagia refers to the Virgin Mary, but the Naos Panagia is also the church of Nafplio patron saint, Ag. Anastasios. Anastasios, on the other hand, has a church in his name in the outskirts of the city. Confused? So are we!

AGIOS NIKOLAOS AND THE SAILORS

St Nicholas, Ag. Nikolaos, was (and is) patron saint of seafarers, but also the saint who has inspirited the creation of our Santa Claus. In 1713 this church was moved from its original location within the city walls and down to the sea, precisely for this reason (the reason being the seafarers, not Santa, that is). Of course, the seafarers’ church had to be close to the harbor. Agios Nikolaos was substantially rebuilt and restored in 1836.

THE CATHOLIC CHURCH AND THE FRANKS

The Franks occupied Nafplio in the years 1212 to 1388. The Catholic Church is also called Frankoklisia, the Franks’ church, and was probably erected originally as a nunnery. In the nineteenth century the Turkish Aga Pasha’s grieving widow converted it into a mosque, as a memorial to her husband. King Otto gave Frankoklisia to the Catholic Church, his way to say thanks to the “friends of Greece” who had assisted his country during the freedom fights. The church is usually closed, but a posting outside announces when the Catholic services are held here - and they can be in English, French or other languages.

THE CHURCH FOR THE SICK AND POOR

Agii Apostolis is a small chapel, built by the Venetians. You’ll find it in Psaromachalas, the first small settlement built outside the city walls. The now large parking lot used to be the site for a hospital that cared for the poor in Nafplio. The hospital was in operation from 1394, until it was torn down around 1950. Only the chapel remains.

If you by now have had enough of churches, walk into the spooky James Bond-like tunnel by the car park and take the elevator up to Nafplia Palace Hotel. There you will find good, expensive drinks, maybe worth it because you sit at the top of the city, enjoying the splendid views over the Old Town and Bourtzi. Nice place to be when the sun goes down!

Easter is the most important religious holiday in Greece. If you are lucky enough to be in Nafplio at Easter, you should join one of the processions on Good Friday.

In the days before Good Friday you’ll find coffins in all the city's churches. These coffins, symbolizing the coffin of Jesus, are decorated beautifully with flowers. Good Friday evening, after the service, around 9 o’clock, the coffins are carried from every church to Syntagma Square. Behind follows the congregation. It is of course essential to have the best decorated coffin, so expect overwhelming “luxury,” but also a lovely, evocative evening with flickering candles and (more or less) holiday-devoted Greeks. (After the possession, many people trotter off to a bar, if you want to follow this custom, arrive early for seats!)

Orthodox Easter is rarely at the same time as our, so please check the dates before you go!

Seven churches and some history 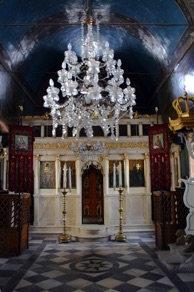 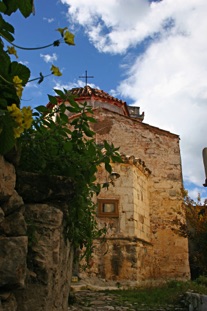 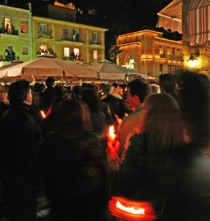