Ancient Trizina, or Troezen as it's also called, was once a powerful city-state. It allied with another powerful city-state, Athens. And although this is 2500 years ago and Trizina geographically belongs Argolis, the area is still part of Attica County, the same county Athens and Piraeus belong to! Trizina must have been a huge city, for when the Persians arrived and declared war on Athens, the Athenian women and children, around 70,000 people in all, were sent to Trizina to be safe, and the people there took well care of them.

Today there are several ruins on the site, but it's not thoroughly excavated, and today (2016) no excavations are being done. The site is little known, and chances are that you're the only visitor. It is so beautiful and peaceful there, with lovely wild olives and other trees that emphasize the pleasant atmosphere. You are a little way up on Aderes mountain, the site offering sweeping views, including towards the island Poros. You can wander around the ruins of temples and other buildings, and the remains of a Byzantine church, Panagia Episkopi. The church was probably built on the ruins of a temple dedicated to Aphrodite. You'll see old plumbing, once filled with water that would help to cure the ill visiting the asklepeion. There's much mythology associated with the place, for instance, it was in Trizina Phaedra spied at her stepson Hippolytus when he trained without a thread on his body, according Euripides.

And there are several points of interest nearby, including a tower that was part of the ancient city walls. You can clearly see that the tower is built with two different methods, the bottom part is dated to the second century, the top is medieval. If you want, take a peak inside the tower, which, by the way, is called Diateichisma.

Just before arriving at the tower you'll see "The Temple of the Muses", muses were goddesses who inspired artists. Follow the dirt road further up past the tower, for a fifteen minutes' walk to The Devil's Bridge, Diavologefiro. It is an old stone bridge that spans a deep gorge, with running water far down at the bottom. Slightly scary if you have a fear of heights, but not dangerous in any way. It's a truly idyllic place, and we can almost envision the god Pan dancing around here, with damselflies from the river below - which otherwise might have been Trizina's “golden stream that never dries." There actually once was a Pan temple close to the bridge, as well as an aqueduct, which led water to the city-state. 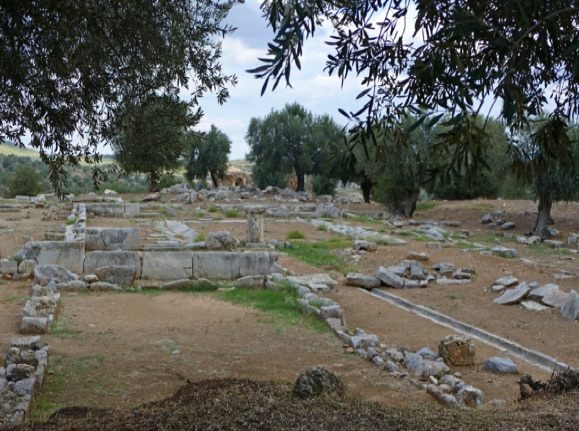 An old city-state, a tower and The Devil's Bridge

Temple of the Muses

The places we have described here are signposted from the small village called Trizina, just drive until you reach the central platia ("square") and follow the signs. At one point you'll reach a fork in the road and see several signs. On the signs pointing to the right, toward Ancient Trizina, it says "Antiquities", and that road ends in a parking lot next to the excavations. You should also visit the other places we have mentioned here, you can park where the road splits and walk on the dirt road that heads left. Admission to all of these places are free (2016).

Troezen (Trizina) is one of the oldest cities in Greece, and its myths are tantalizingly murky and full of clues to mysteries that will probably never be resolved. 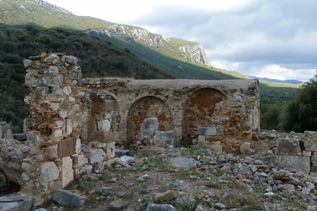 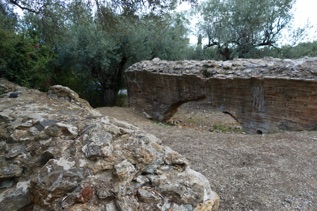 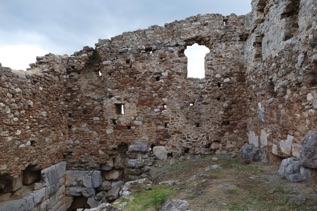 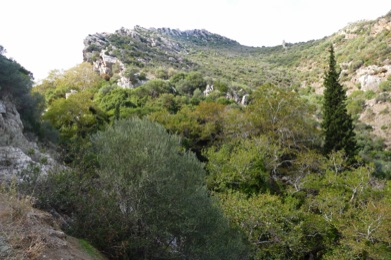 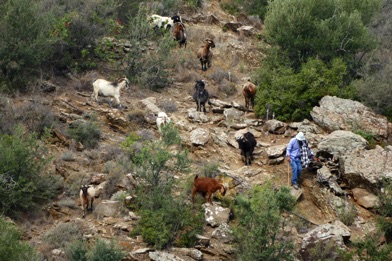 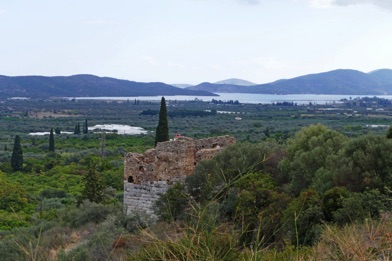 Near The Devil's Bridge

A shepherd leading goats down a steep slope in Trizina