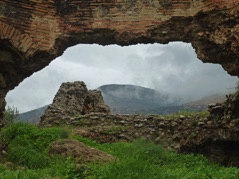 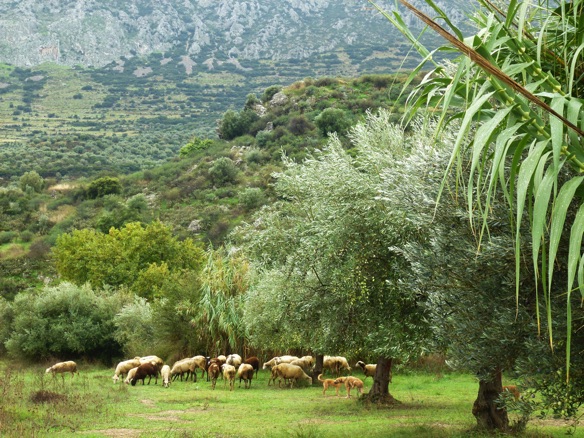 Prosymna, or Berbati which is the old name, is one of the many places in Argolis crammed with history, yet being overlooked by most tourists. Nowhere in Greece will you find so many ancient (and older and newer) sites per sq. km. as in Argolis, and you haven’t got time to see everything. (We do understand that, as we've spend years and still haven't covered it all.)

Coming from Nafplio, and a kilometre before Prosymna village, you will see a beautiful, three-arched bridge to your right. We don't know the age of this bridge, but it's called Asterion, in mythology the father of Prosymna. Prosymna and her sisters were wet nurses for the godess Hera. The bridge reminds us that in ancient times The Kontoporeia Road went through Prosymna, a road that started from Corinth and followed the route Hiliomodi - Ancient Tenea - Klisoura Agionoriou - Prosymna and then Argos. The name (Kontoporeia) shows that it was the shortest way between the powerful city states Corinth and Argos.

The village Prosymna is a small, typical rural village; you could always go for a coffee there, but the sights begin just before you drive into the village (if you are coming from Nafplio). Turn left as you reach the village, and the first sight you encounter is an other old bridge. Unfortunately the area under the bridge seems to be used as a local junkyard. But the bridge is fine!

Next post; to your left you’ll see the base of a Hellenistic tower, beautifully set against a backdrop of green fields and bare mountains. Drive further on this road and you will see a remarkably well-preserved Roman bath to the right. The Roman bath is from the 200's and excavated as recently as in the 1990s by Swedish archaeologists, although the Swedes began their work here as early as in 1934. The bath has an impressive size, many people lived in the valley when it was built, now it is, as you will see, deserted.

Just behind the Roman bath you will find a small church. It's called Agiannis, and beares witness to how much the landscape here has risen over the last few centuries. The church is located in the middle of a field, so be careful where you walk and don’t harm the farmer’s crops. A little north of Agiannis you will find the well-preserved Agios Giorgos from the 11- or 1200s.

We drive on, and after a while we can park the car by the intersection, walk right (and then to the left) and see a "beehive tomb" a tholos, which shows that rich people have been buried here. Also in this area a part of an old Mycenaean road starts, from here you can walk all the way to Mycenae, following the same path the Mycenaean’s did.

To the left at the crossroads, the acropolis is situated on the small hill that rises out of the landscape. The hill is named Mastos (breast) because, well, it looks like a female breast. Here archaeologists' findings showed that people have lived here since the Neolithic period, i.e. in around the fifth millennium before our time, right up to the Middle Ages. Potters have worked here for centuries, and beautifully decorated ceramic vessels made here and in the rest of northeastern Peloponnese found its way to every corner of Hellenic antiquity. The north side is said to be the easiest side to climb, but the hill is so overgrown with scrubs that we've not yet managed to reach the top.

After visiting the beehive tomb and the acropolis, you can continue driving the road up the valley, where you will soon arrive at the little Church of the Koimesis, The Assumption Church. Nice place for a picnic, with beautiful views over the valley and down to the village Prosymna. From here you will see the remains of an aqueduct, and some bases for old water mills.

All the layers of history in one valley 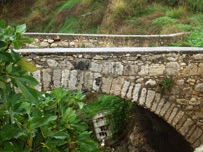 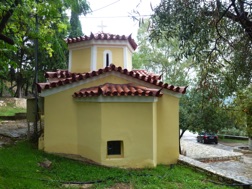 The bridge in the village.

Farming has taken place in Prosymna Valley for millennia, and still does. Olive trees grow in the valley, and the trunks testify that many are very, very old. Maybe you encounter a shepherd with his flock, or sneak to pick an orange from a bountiful tree. 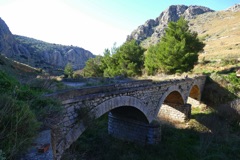 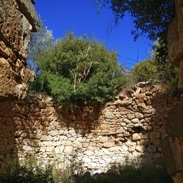 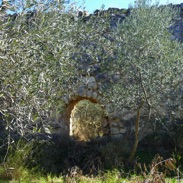 Part of an aquaduct, leading water to a mill. 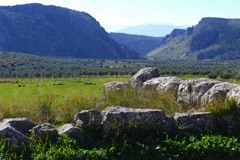