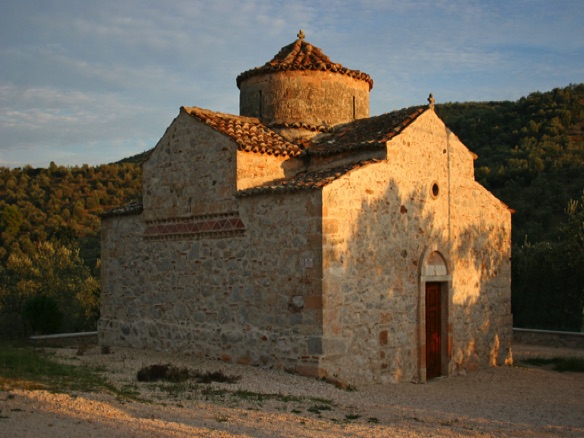 If you like to visit small, old churches, take a trip to Ligourio, just west of Epidavros. Here you’ll find many worth seeing!

The main picture shows Agios Ioannis Theologos (St. John), which was built in the 1100 century and restored around 1700. Most of the frescoes here are gone, but we can see that the builders of the church have made use of some building materials from even older buildings. Presumably, this was once a monastery church, which now lies quite alone in a beautiful, rolling agricultural landscape.

This church is located a short drive north of the town, on the road to Chrysospiliotissa and Nea Epidavros.

In the centre of Ligourio there are several churches: another Agios Ioannis from the 11. and 12. century (see below) and Panagitsa or the Virgin Mary church from about 1700, both with beautiful frescoes. Just outside the town, Agia Marina from 1713 (see below) and Agios Athanassios, the latter is very old and was renovated in the 1600 century.

The Pyramid of Ligourio can be found near Agia Marina. The Pyramid of Elliniko is considerably better preserved, but if you're nearby anyway, take a look. Only the base is preserved, and it makes us wonder how the gigantic stones where transported here and lifted on top of each other.

While we're on the theme of Byzantine churches, we’ll also mention the one in Adami, a small village on the road between Ligourio and Trachia. This little double-nave church is the only of its kind in Argolis except the one in Arachneo. The church's two "parts", Ag. Nikolaos and Ag. Dimitrios, were built in the 1500s.

(By the way, if you drive on to Trachia, this is the village to buy bread and cheese - people here are famous because the quality of the their locally produced cheeses and bread.)

But we were not quite finished with Ligourio: We must not forget the private Kotsiomitis Natural History Museum, with fossils, minerals and shells, a total of 6000 items from around the world. The collection is quite unique in Greece and even by European standards. You can see fossils that are 3.000.000 to 530.000.000 years old, from near and far. Also visit the museum shop, where both fossils and handmade jewellery made of local and not so local minerals are sold for a very resonable price.

The village with all the churches

Aigios Ioannis Eleimon (St. John the Merciful), is easy to find if you keep an eye to the right as you drive through Ligourio on the way from Nafplio.

The nave is the oldest part, dating to the late 1000’s; the rest is about 100 years younger. If you look carefully at the masonry, you’ll see some white marble stones with carvings. These are taken from Asclepius’ Epidavros. Inside you will find frescoes partially eaten by the test of time. 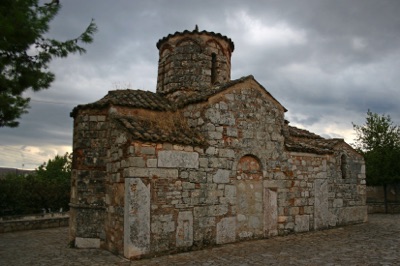 In the western part of Ligourio, just after The Natural History Museum, follow the signs to The Pyramid, and Agia Marina is just a 100 metres or so further along, on the foot of Mount Arachneon. The church, from 1713, has beautiful hagiographies, and its dome rests on four ancient (three of them ionic) marble columns. It's a lovely little church, and the carved graffiti on the floor tiles, mainly from 1925 to 1945, just adds flavour! 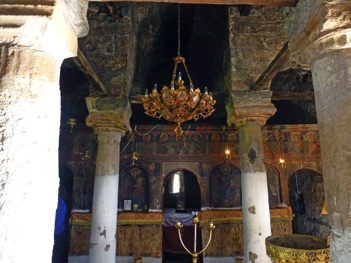 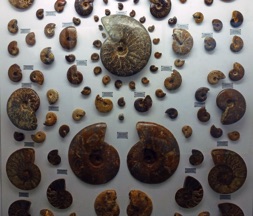 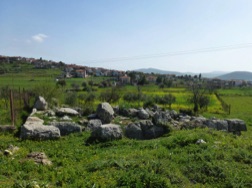 The Pyramid of Ligourio

From the Kotsiomitis Museum of Natural History