If you came to Argolis from Athens, you’ve already passed the Corinth canal, but you probably didn’t even notice it, the canal is narrow and the bus drives fast... There’s more than one bridge over the canal, and parallel to the one the vehicles are hurtling over, is a small bridge, with walkways on each side. It is truly exciting to look at the canal standing high and directly above the water.

Already in the 600-century BC, Greeks had planned to build this canal, to avoid having to sail the 400 km long stretch around the Peloponnese. But the work turned out to be too extensive, so they constructed a paved track way, Diolkos, where boats could be pulled over. There are still traces of this track way on the southwestern side of the canal.

The canal, which is 6.3 km long and 21 m wide, was completed in 1893, and 11,000 ships pass each year. If you prefer, you can take the trip yourself, local tour boats in Isthmus offer this experience. But it’s perhaps just as great to be on top and see the big boats almost forced through the canal by small tugboats.

Corinth was a very important trading town in ancient times and under Roman rule, and there is a large excavation site that tells this story. Most of what you see in Ancient Corinth (main photo) is from Roman times. It’s a great area to stroll around; we can visit, for instance, the remains of an Apollo temple (main photo), old roads, shops, theatres and a great public bathroom. Incidentally, to go to the bathroom was a social event for the ancient Romans. Visit the museum as well, which shows artefacts from Corinth’s long history (people have lived here since Mycenaean times), including a magnificent antique kore, a young girl. You can still find traces of paint on her, which reminds us that all the white marble statues we admire today, was originally painted in beautiful colours.

Acrocorinth is the castle ruins, which sits high above the town of Corinth (top of main photo). You can drive right up to the western gate, but you’ll have to walk some distance to reach the top. This is a huge and mighty castle, dating back to antiquity, although the Venetians and Turks build most of what we see today. Acrocorinth was actually one of the most important Greek castles in the Middle Ages, both strong and strategically placed.

We, who are not warriors, can admire both the craftsmanship and the awesome view.

Otherwise, the small, black raisins, Corinthian raisins, get their name from – yes, you guessed it - Corinth, made from a small Greek grape that grew (and grow) in the area. And Paul's letter to the Corinthians was, yes precisely, adressed to the people who lived here.

As an alternative (and longer) route between Nafplio and Corinth, drive over the mountains via lovely Agionori. Or, take the route the locals call the old road (because it is): You drive to Dervenakia and then via Chilomodi, through a green and gergeous countryside and small villages with good opportunities for a little coffee break. 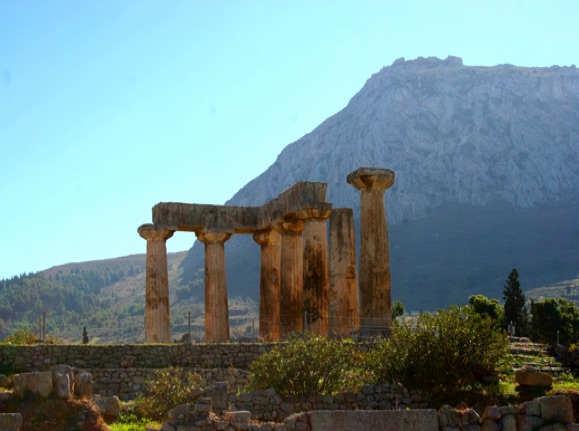 Much more than a canal

The Apollo temple (over)

and the Canal (below)

None of the mentioned sights are within normal walking distance from the city of Corinth, the Corinth canal is 8.5 km away, Ancient Corinth is located approximately 7 km away, and Acrocorinth is even further from the city. That means you need a (rental) car or use taxis when visiting the sights.

Corinth city is modern, built after 1850, and not a must to visit, although it has its charm. However, you may well plan a lunch in one of the many taverns in Ancient Corinth, where it is pleasant to sit overlooking the excavations or at one of the restaurants that overlook the bay. (It should be added that we have only been there during the off season, we do not know how it’s there when the tourist crowds come.)

There are direct trains (Proastiakos, see Transport page) between the airport in Athens and Corinth, so it 's not such a bad idea to add a day at the beginning or end of your Argolis visit here. Taxi between the railway station and Corinth city costs a few Euros, and there are buses to / from Nafplio at the Corinth canal / Isthmos).

A curiosity at the end: Sisyphus is said to be the ancestor of the ancient Corinthian royal family. King Sisyphus, by Homer called the world's most cunning man, behaved so terribly that the gods sentenced him to roll a huge rock up on top of a mountain. Each time he reached the top the stone rolled back down, and then he had no choice but to start again. While in Corinth, look up at the steep, 575 m high Acrocorinth Mountain, and then you realize what a Sisyphean task really means! 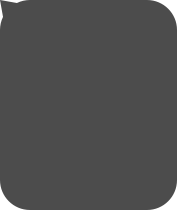 Corinth is located 60 km north of Nafplio. The bus runs regularly from Nafplio, and stops at Isthmos, very close to the canal. To continue to Ancient Corinth and Acrocorinth you’ll need your own transport.

Ancient Corinth (over) and a small part of the taverna area (below).

Ancient Corinth with Sisyphus’ workplace in the background. 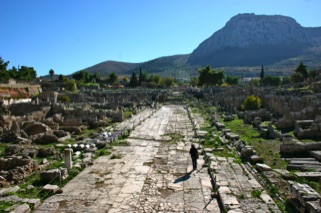 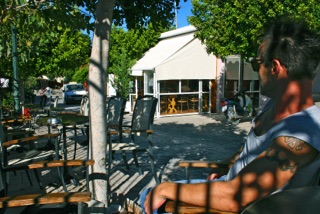 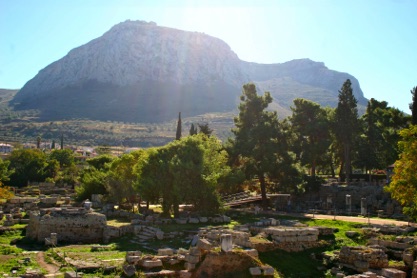 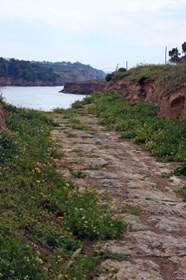 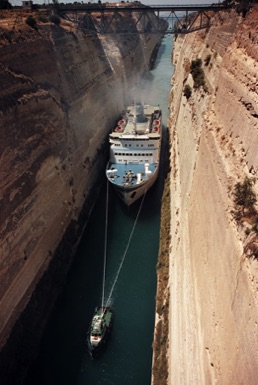