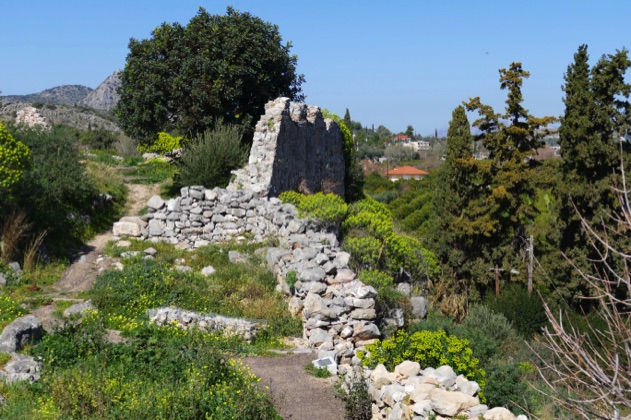 In Ancient Asini / Kastraki you’ll find the remains of a city fortified in the 2. and 3. century B.C. (main photo), and an old Mycenaean cemetery on a nearby hill. Swedish archaeologists explored the area 80-90 years ago. They found, among other artifacts, 25 tombs, including nine vaulted dome graves. Exclusive objects were placed in the tombs to follow the dead to Hades, including the famous "King of Asini" - that doesn’t depict a king but a woman. She, along with other finds from the area, is on display at the Archaeological Museum in Nafplio.

There are not that many remains from the former residents here, but Ancient Asini is situated on a small promontory that’s excellent for a stroll. In the last years the Kastraki site has been upgraded, and is now far more easily accessable. There's a small museum and a Multimedia Centre, you can visit the ruins of a Roman bath, Hellenistic bastions, fortifications, and a cavern made by the Italians during WWII, now with an exhibition that through text and pictures tells about this war in the area.

And an extra bonus is the view of both the countryside and the Argolic bay, especially beautiful in the spring, with a plethora of wild flowers in the lush grass. Entrance: free (2016).

Nobel Laureate in Literature, Greek Giorgos Seferis, has written a poem about the king, see an extract below.

Also worth visiting in Asini is Metamorphosis Sotiros, a cloister church built in the 1500s. It looks like it has melted over the landscape! Beautiful frescos inside, but you’ll ned a flashlight to see them properly. Below the church a small pond is filled with water from a river that runs from the mountain and under the church. Outside the church you’ll find benches and tables under a covered terrace, very inviting for a picnic. The tower ruins on the other side of the road were probably a Venetian watch tower, from the top of it you could see all the way to Palamidi.

Profiti Ilias is the name of a little church on top of the steep sugar top that rises from the otherwise fairly flat landscape near the village Asini. You can climb up "the back", it takes about half an hour and is maybe not as challenging as it seems, but you need to be in a reasonably good shape. Great views reward you on top, visit the church and ring the bell outside. (Because that is what you're supposed to do!)

A fictional king, a melting church, a healing window

Ancient Asini/Kastraki: Fortifications above and a little church below. There's even a lovely beach on each side of the citadel!

THE KING OF ASINI

All morning long we looked around the citadel

starting from the shaded side there where the sea

green and without lustre — breast of a slain peacock —

received us like time without an opening in it.

Veins of rock dropped down from high above,

at the water’s touch, while the eye following them 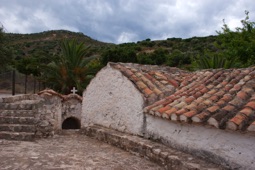 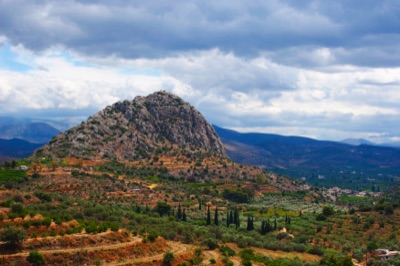 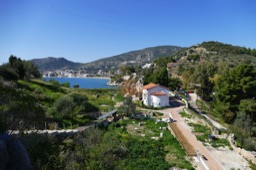 The little village Lefkakia, between Asini and Nafplio, has a traditional square where we love to eat at Vicky's. But more importantly, on the hill to the west, on the other side of the main road from Nafplio, lays the small Agios Ioannis church, with a fundament of ancient stonework.

Well, first, lets travel a little in a north-westerly direction, to the Pyramid in Elliniko. No one knows what this pyramid was used for, but "watch tower" or "communication tower" are the hottest theories. And the base of Agios Ioannis are built and positioned exactly like those in Elliniko, meaning that here in Lefkakia once lay another pyramid, part of the same communication system. The small church built upon the ancient walls is probably from Ottoman times.

Inside the church, you'll se a ladder leading up to a small opening, and stairs leading down outside. This is said to heal sick children and/or help so-called barren wives to get pregnant - if they walk up the ladder, through the window and down the stairs. Either way, faith can move mountains, right?

Anyhow, visit Agios Ioannis if you're in the area, bring some food, have a picnic, - and climb through the window if you feel like it!

This is also a good place for a walk, and you can walk all the way to Tolo, if you want to. If you don't have a car, take the Nafplio - Tolo bus to Lefkakia, and another from Tolo back to Nafplio. 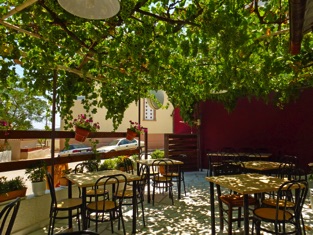 Top photo: Vicky's taverna in Lefkakia, and right: Agios Ioannis church with the ancient walls and the "healing window".

The Nafplio - Tolo bus stops close to Ancient Asini. Ask he driver to let you off at Kastráki.

If you want a swim after, three beaches are in walking distance: Kastraki, Plaka and Tolo. 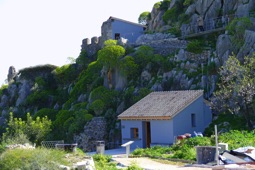